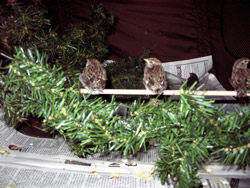 The most common sparrow is the House Sparrow that flocks by the dozens to feeders in yards all across North America.  This is much to the chagrin of many birdwatchers who would rather see a wider variety of birds at their feeders than just the aggressive House Sparrows.

These sparrows are called “House” because they are most often found near human habitation. They were introduced in 1851 from Europe and have become more common in North America than in Europe these days. However, they are now declining across most of their North American range also.

These gregarious little birds are most often found in flocks of varying sizes, chattering back and forth. They are “cavity nesters” but prefer man-made structures over tree cavities and will nest in the eaves or walls regularly. They defend these nests vigorously against intruders and have been known to evict other birds from a box so they can take over. Both parents participate in all aspects of nesting and raising young, although they are not monogamous.

Most sparrows eat a combination of seeds and insects, most commonly from the ground, where they hop rather than walk. They use their thick beaks to break open the seedpods. House Sparrows in particular have learned to pick up the easy meal at the local bird feeder where it is entertaining to watch the males display for the females by puffing up, spreading their wings, and hopping stiffly around her while fanning their tail and bowing up and down. The males will often chase each other and vie for a female’s attention. Adult males and females look differently and are easy to tell apart from the male’s large black bib under his chin.

House Sparrows love to take dust baths. They fluff up and flick the dirt under their feathers and over their backs, as though taking a water bath. They also frequent water sources and enjoy bathing there as well.

Humans have been helpful to these sparrows over the years, despite many people disliking them because they are not “native”. Humans also contribute to problems for House Sparrows because of outdoor cats, reflective windows, cars, and poisoning.

We encourage you to take a second look at these common backyard birds and appreciate them for the entertainment they provide. 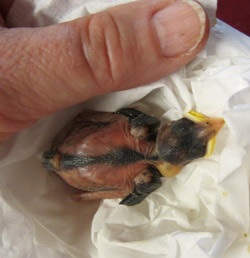 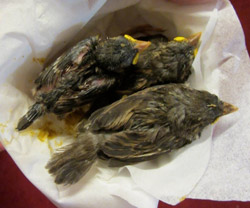