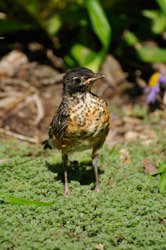 Robins live across North America in woodlands as well as being common residents of our towns and cities. We look forward to their cheery song in the spring as a sign that warmer weather is on the way. However, some robins actually stay with us year-round, living in flocks, some known to be hundreds of birds.

In the summer, however, they are nesting and raising young, so they are usually seen in pairs, with the females sleeping on the nest at night. In Saskatchewan, the males and females look very similar and are hard to tell apart.

They eat insects, and are often seen hopping around on our lawns looking for worms in the morning. They also enjoy fruits and berries, often picking the best of the crop before the humans can get to them. They tend to eat more fruit later in the day, when the earthworms have gone further under ground.

Robins in southern latitudes can have up to three broods in a year, although this is not possible in Saskatchewan due to the short summers. Some robins will have two clutches, particularly if the first one failed. Only about 40% of nests are successful, and only 25% of those juveniles survive to migrate south, and then, only 50% of those robins will live to return in the spring.

A robin nest is often in the crotch of a tree, made by the female, from the inside out, with mud and dry grass as well as other materials on the outside to reinforce the structure. They are very sturdy and fit the usual clutch of four eggs quite comfortably. It is common when the young get to be almost fledgling size that one will fall out prematurely. This is often when they are found and brought to the rehabilitation centre.

DO NOT “RESCUE” A YOUNG ROBIN IF IT IS HEALTHY. The parents will continue to feed it on the ground. Call before you pick it up and find out if it REALLY needs your help. If it is fully feathered and can hop, it is probably just fine. Most of the time, they will simply need a day or so to “find their wings”.

Human-related concerns include outdoor cats that often leave orphaned babies who then arrive at the rehabilitation center; window strikes that result in fractured bones, cars; and pesticides in lawns. 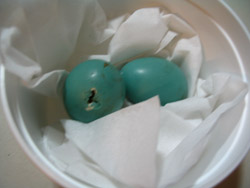 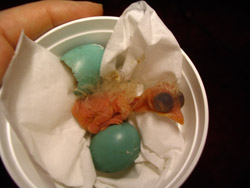 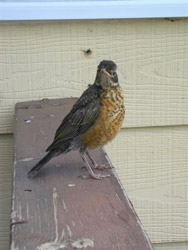 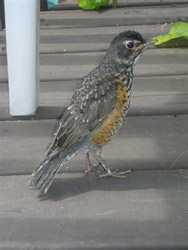 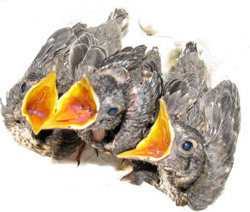