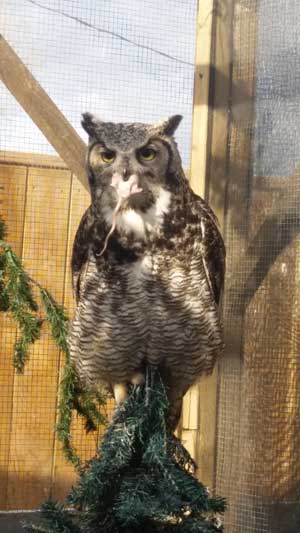 Saskatchewan is home to 11 species of owls at different times of the year. The most abundant and widespread is definitely the Great Horned Owl which can be found across the continent in any habitat with a tree or empty building!

The most recognizable feature on the Great Horned Owl are the “ear” tufts, which are really just feathers that the owl can raise or lower. These predatory birds are nocturnal, hunting at night for small rodents, hares, and skunks among other things.

The colours of a Great Horned Owl tend to be a mixture of browns and greys, although some are darker or lighter than others, varying by region. They all have the distinct white patch under their chin, and white around their eyes. Females are larger than the males, as is the case with many raptors.

Nocturnal owls have the amazing ability to locate prey by sound due to their “offset” ears… unlike us, their ears are not placed symmetrically on their head. By each ear being at a different height, they are able to triangulate the location of a mouse under the snow! This phenomenal hearing comes at the price of sight.

You may notice them bobbing their heads up and down, and this is because they cannot move their eyes and must move their whole head to gain a perspective visually. Although it may seem that they can turn their heads all the way around, 360 degrees, in reality, they can only turn about 270 degrees (still impressive) due to their extra neck vertebrae. They have 14, while humans only have 7!
Owls gained a bad reputation by farmers due to their tendency to eat chickens. However, they do a great service by clearing your yard of all mice and voles. They also happen to have an affinity for skunks, which is fine as their ability to smell is limited (clearly!). Unfortunately, they have also been known to take small cats that are allowed to roam outside at night.

Great Horned Owls do not migrate, and can be found on their chosen territory year-round. No owl makes its own nest, and Great Horned owls are no exception. They will take over a magpie nest or other suitably sized nest. They begin their courtship by hooting back and forth to each other starting in February, and have eggs in the nest before the snow melts. Their downy chicks spend about 8 weeks in the nest growing until they can begin short flights. Once they venture out of the nest onto branches, they are called “branchers”.

Owlets may be blown out of the nest by a storm, but owls are fiercely protective parents and will continue to care for the young on the ground, bringing food and fending off predators. If possible, the young will try to return to the tree, using talons and beak to climb to safety. If you find a young on the ground, look around and if the parents are there, CAREFULLY put the owlet on a branch and let it be. Do NOT Kidnap the owlet! The parents do a Fantastic job raising these precious fluffballs, and we do our best to foster them out to new families when they arrive at the Rehabilitation Facility truly orphaned.

Owls are also vulnerable to West Nile Virus and may suffer neurologic symptoms if they are infected. There is no “cure” for a virus, except support care, but often by the time the owlet is discovered, the virus has progressed beyond the point of salvaging the owl.
The young will stay with their parents well into the fall, depending upon them to provide food while they learn to hunt and catch rodents. Hunting is more difficult than you might think and it takes a while for the young to perfect the technique. The parents are MUCH Better at teaching this than we are.

Owls fly silently due to specializations of the flight feathers. Although the beak may look dangerous, when handling an injured bird, beware the talons, and wear thick gloves or a towel. They swallow small prey whole, coughing up a “pellet” of the fur & feather parts that are not digestible.

Listen for these majestic birds at dusk making their distinctive “whoo-hoo-ho-o-o” calls, and appreciate their ability to survive almost anywhere. 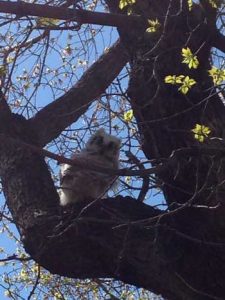 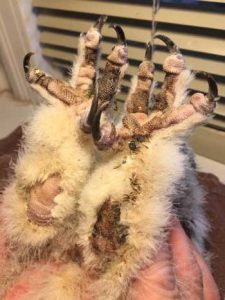 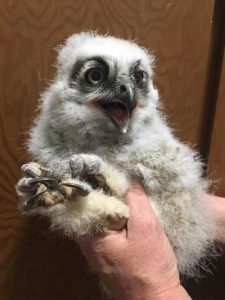 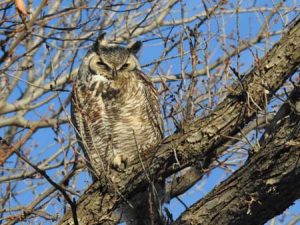