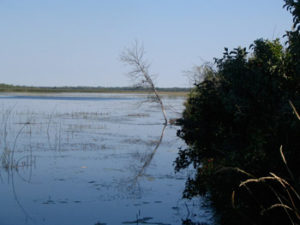 Mallards live across much of North America in our wetlands, lakes and ponds both in the city and countryside. They are the most recognized ducks in North America and almost all domestic ducks come from this species.

The male’s green head, yellow bill and grey/brown body are easy to identify. They return in the spring to nest in the prairie potholes of Canada. They will have found a female mate in the fall and spent the winter in large flocks further south in warmer climates.

Like many ducks, they have distinctive displays during mating season and beyond. The males like to show off by bobbing their head, flapping their wings, or getting into a pushing contest with another male. If they “win the girl’s heart”, they are paired for the year and will stay together until the eggs are laid. The female will lay more than half her weight in eggs, taking a toll her physical health during this time.

Both in the pair help with nest building, but once the drab female is settled on the nest for the 28-day incubation period, the male joins a group of other males for the rest of the summer. Many female birds are more drab in appearance so they are more camouflaged while nesting. The nest is on the ground, hidden by vegetation and lined with her breast feathers. When she goes to eat each day, she covers her eggs with leaves and twigs to hide them from predators. When the eggs hatch (from 10-12), the hen leads the ducklings to water where they will stay until the young can fly, about 12 weeks.

In Saskatoon, mallards have learned to nest in backyards and courtyards for safety. They, unfortunately, are often far from water (as the ducklings walk) with many hazards (wide streets, tall curbs, dogs, cars, cats), and the hen has not considered these issues when she chose her nest site. Thankfully there are people through WRSOS who will help by catching her and the babies and taking them to water.

Mallards are dabbling ducks, meaning that they do not often dive, and are more likely to be seen with their tail in the air, tipped over searching for seeds and aquatic vegetation. They will eat insects and vegetation on shore as well, or from piles of uncovered grain.
There are many predators of mallards, from hawks and other birds of prey to foxes, coyotes, raccoons, snakes, and even humans. They have greatly benefited from their relationship with humans due to being so adaptable, and are generally valued as a wild neighbour. 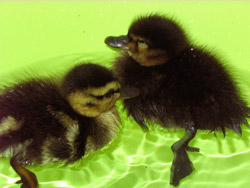 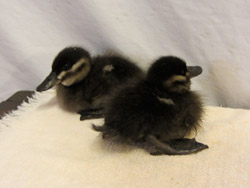 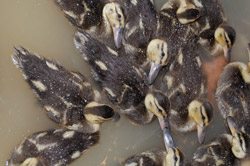 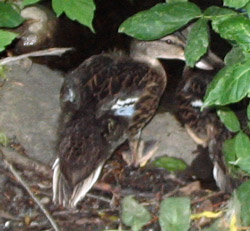 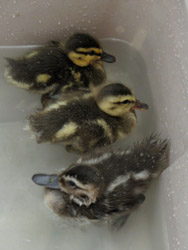 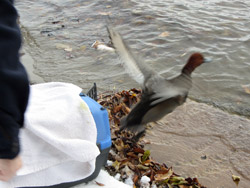 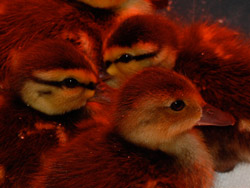