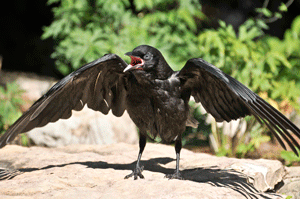 Crows live across North America in almost all habitat ranges, from cities to fields and prairies and to the boreal forest edges. We often hear their familiar ‘Caw” before we see them. Most crows migrate south for the winter, but some stay with us through the cold months.

In the fall, crows congregate into large flocks, getting ready to head for warmer weather. In summer, they are often seen in family groups, with the young following the parents and noisily pestering them to feed them. Crows are incredibly adaptable and will eat anything, although their main diet consists of insects, grains, seeds, nuts, berries, and small animals from worms to mice and young birds.

Crows are often seen scavenging food and eating carrion, but, despite their large bill, they cannot actually break through the skin of even a small squirrel, and must rely on other predators to open the carcass or for it to become soft enough to eat. They actively predate nests, following adults to discover the nest location, or watching other crows and following them to food.

The males and females look exactly alike and it is impossible to distinguish them. Both participate in building the nest, which is made up of twigs and looks quite bulky and flimsy from the ground, but the nest cup is lined with pine needles, soft grass or other cushioning material. These nests are sometimes used in later years by owls as they do not build their own nests. Crows prefer evergreens, but will use large bushes and deciduous trees if necessary.

Both parents tend to the young, often helped by last years offspring as well. Crows do not breed until they are at least two years old and usually not until they are four years old or more. The young crows will sometimes stay with the family group until they are of breeding age.

Crows are extraordinarily intelligent and have been known to make and use tools, usually to access food. They cache extra food, and will try to find other’s cache and steal their food. Alternatively, they will also work together to get food, by distracting a predator while the other steals the catch, or by calling others in to a food source.

One problem is that crows are so successful, humans sometimes find them annoying and take steps to remove them from the neighbourhood by shooting them. The other common problem is West Nile Virus to which they are very susceptible. 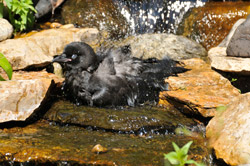 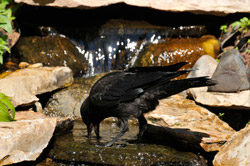 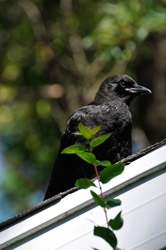 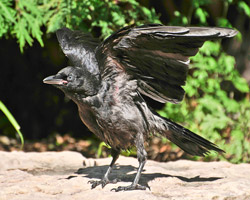